I learned to ride my buddy’s old 1935 45. This was the classic pumper where you had to pressurize the oil pump system with a hand pump, mounted through the split gas tanks, with an unmistakable knob handle that you grasped, gave several vigorous thrusts, kicked the bike over and when it fired up, killed every mosquito within 50 yards.

It was also notorious for cracking the roller cam followers in the middle of nowhere requiring a tow home. My buddy couldn’t afford the very high priced OEM replacements so he turned out new ones with better grade steel on his own Southbend lathe.

I was barely 16 when I bought this for $100 in March 1955 from a wealthy in kid in Ruskin Row in Crescent Wood neighborhood in Winnipeg, Manitoba. Many the hour we spent cruising the local highways and byways - paved, gravel and mud - struggling with stretched chains, rear wheel lugs falling out all the time (our pockets were full of spare lug nuts and and large allen key wrenches). We ranged as far as north as the party beaches of Grand Beach and Winnipeg Beach on weekends until the snow flew and too cold to ride any longer. The longest trip I took on this bike was to West Hawk Lake, 90 miles east of Winnipeg. I drove this bike from 1955 to 1956.

In 1957, I bought my black 1949 FL from the same rich kid on Ruskin Row. With bigger things in mind, traveling to such exotic cities as Fargo, North Dakota, and Minneapolis, Minnesota and even points beyond, such as Milwaukee and Wisconsin Dells, Wisconsin, Chicago, Illinois and Dayton, Ohio.

We did the Gypsy Tour (terminology for present day Rally) to Mankato, Minnesota, in May of 1957.

These machines were inherently unstable and erratic above 50 mph for the most part with stretched chains, tearing up sprockets and constant valve lifter failure (a damn nuisance) and ungodly vibration above 65 mph, dangerous brakes which were essentially useless above 45 mph.

I soon learned to carry both primary and secondary sprockets, at least two high grade Diamond chains, both primary and drive, for fear of being caught in the middle of nowhere and having to buy cheap industrial tractor chains as replacement which wouldn’t last more than 500 to 1000 miles, as well as keeping three or four hydraulic lifters and spare points and condensers at all times along with an extensive array of Snap-On tools for emergency road-side repairs.

The electrics were abysmal as one soon learned to shut off any accessory lights at night for fear of overpowering the battery and pathetic 6-volt generator of that time and getting caught dead in the middle of nowhere in the middle of the night.

Even so, I spent a lot of money on accessories and glistening black lacquer repaint job done by a show car specialist in Winnipeg who was crookeder than a dog’s hind leg stealing parts off customers bikes and cars but still did the best paint job in the city.

I bought the powder blue and white 1952 in Dayton, Ohio, after my 1949 met an untimely end due to a crossover metal gas line cracking (as was common), leaking gas unknown to me at a filling station at the outskirts of Xenia, Ohio.

Early one morning when I was refueling on a very, very long trip in August 1959, I kicked the bike over and it backfired, as was very common,

and promptly went up in flames like a Roman candle where it sat over a 30,000 gal reservoir. The gas jockey and I quickly dragged it into the street and let it burn. I replaced it four days later, after my Travelers Insurance claim was settled, with this enchanting 1952 that I had been admiring all the time while the insurance adjusters appraised my destroyed 1949.

I continued my trip on the 1952 down through Kentucky, Tennessee, Georgia to the tip of Florida around its west coast and up through the panhandle and along the Gulf of Mexico, through Biloxi, Mississippi, crossing Lake Charles in Louisiana on to Houston, Texas, with the intention of going as far south as Monterrey, Mexico.

But, 30 miles outside of Houston, the generator bearings seized up and I had to have the bike trucked back to the Houston Harley dealer for repairs. Having been on the road for over 4 weeks and running out of money, I turned back north and traveled through Tulsa, Oklahoma, and Wichita, Kansas, passed through Kansas City and Omaha, Nebraska, up the Red River Valley up onto Pembina, North Dakota, the border point 67 miles from Winnipeg. I proceeded to cross back to Canada but was stopped and had to take the bike back because its age violated Canadian customs import rules.

After logging over 5300 miles on that trip alone, I subsequently sold the bike off through a Harley dealer friend in Fargo, North Dakota. It probably was the most reliable Harley I ever owned and its buyer was grateful to me for many years after. 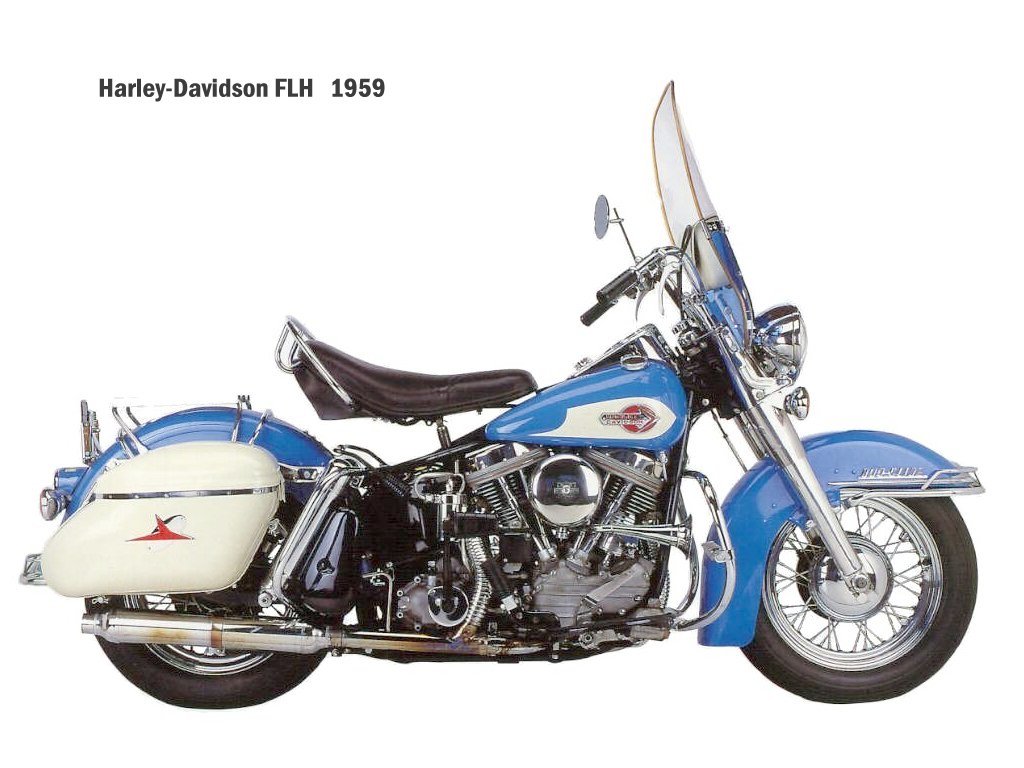 After a visit to Doc Dytch of Dytch Sales in Des Moines, Iowa, in 1962, I had him build a 108 cubic inch big bore stroker engine which had to have clearance from Harley due to their patent design. We also had Jim Leinwebber design and manufacture the high lift cams at Doc’s recommendation for the engine. At Doc’s request, the pistons were made by Jahns, the premier maker of custom pistons of that period.

After my Nova Scotia trip of 1963, I proceeded with this project but not being terribly happy with the very pathetic single carb Tillitson set up that Harley utilized. In 1964, I had the cylinder heads reported for dual carb set up and began experimenting with various carbs, such as Amal and SU, neither of which was sufficient size or capability to synchronize for this large engine.

In 1965, on a visit to Milan, Italy, for the large international motorcycle trade show (I had become an importing dealer of Norton and Ducati by this time) I met with Luigi D’Ellorto of Carboratori D’Ellorto fame, discussed and described in detail my engine configuration, specifications in detail and before leaving the trade show in Italy, personally received from him a set of 42mm carbs with an extensive set of jets and slides.

Our shop proceeded to build the engine which performed incredibly with these very refined modern carburetor components. Further testing and trials in our shop and local drag strip encountered a lot of transmission and traction problems. We then obtained and installed the then little known custom made drag motorcycle slick. By using the enormous engine torque in second gear launches, we also avoided the common 1st and 2nd gear shift skips of the very crude Harley transmissions getting a reasonably straight line full shot.

In those days, it was very difficult to get any testing done because of the limited number of meets at Keystone Bison Dragways in Winnipeg which forced me to trailer the machine over 400 miles to Anoka, Minnesota, for additional testing opportunities – not an easy task.

Sadly, after numerous failed trials, I made a really successful first whole shot in Winnipeg. Shifting seamless up to 3rd gear, the power stopped and I looked down and watched my crank cases separating. The front piston failed, cracking at the top ring land, shattering the engine all over the strip and coasted through the traps in pieces at less than 13 seconds. It was a blast while it lasted!

Being a busy dealer, I had to put that project on the shelf for another day and eventually rebuilt the engine as a 88 inch stroker with standard barrels because the Dytch barrels were tore up, reinstalled the chrome cylinders, and eventually sold it to a custom bike enthusiast in Edmonton, Alberta, in 1967 – thus ending my Harley career.

At the same time, we were building 250 Ducatis in our shop, Chariot Cycle on Selkirk Ave, that could run the quarter mile in the high 12s and Norton 750s that could run in the low 12s as well as dominating the local quarter mile dirt track races with our very talented head mechanic, Murray.

Our racing team dominated local flat track and hill climbing for several years while we operated an active work shop in the mid to late 1960’s. 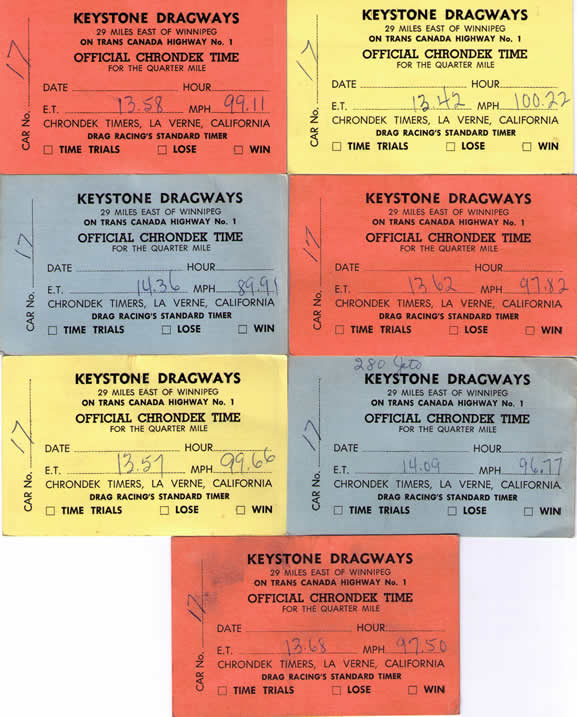